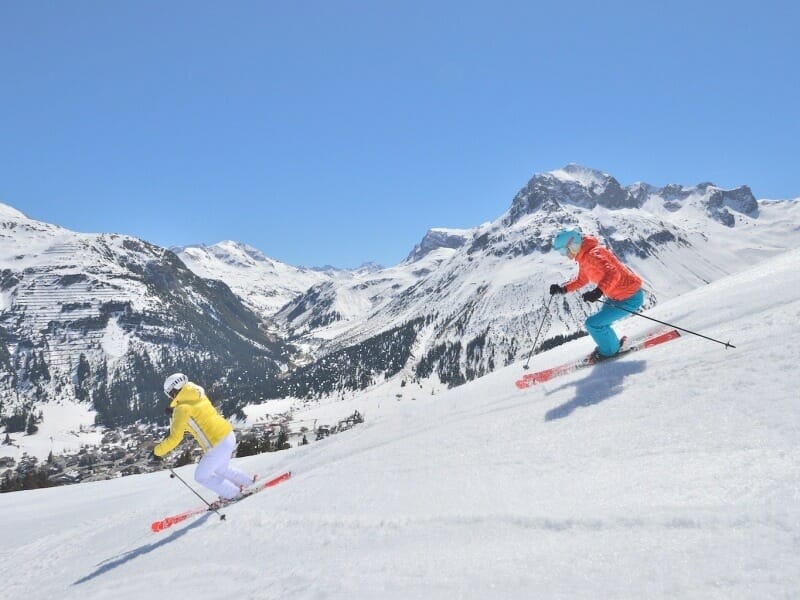 Tout schuss: the history of skiing.

The man of the 21st century defies the survival instinct by hurtling down the ski slopes for more than 100km.

The history of skiing is having boards under your feet and one or two poles in your hands date back several thousand years. Historians have found wooden skis dating back 4’000 or 5’000 years in Sweden. They would thus be older than the Pyramids of Egypt!

We can imagine that as soon as the man was able to walk and lived on the snowy ground, he used skis.

Skiing allowed many humans to be fast on the snow to hunt, therefore, to survive.

Skiing would have been born in Mongolia, almost 10’000 years ago. Even today, the Mongolian nomads perpetuate the customs of their ancestors, who were among the first to put on skis. They repeat the same gestures and make identical skis: two wooden boards covered with reindeer skin, attached to the feet by straps. Every winter, the nomads organize traditional races to reaffirm their origins.

But the peoples of Mongolia are not the only ones to claim this paternity.

As early as the Middle Ages, we find representations of skis in books in Central Asia, Scandinavia, Russia. We discover that skis were already used by Norwegian soldiers to make war.

At that time, the snow covered an important part of the territory and men used skis to hunt and move faster.

Skiing is therefore not a recent invention – man has always needed to travel on snow to hunt – but its development dates back to the first crossing of Greenland (a land still totally unknown at that time) by the brilliant Norwegian scientist Nansen, in 1888. The crossing will be made from East to West with light equipment after 49 days of adventure. This expedition will be then very mediatized and will help to the democratization of the ski in the world. Its method developed at the time is still used today by the greatest explorers to probe our planet.

At the end of the 19th century, thanks to Nansen, these long wooden boards became popular as far as the Alps.

In winter, thousands of kilometers were made inaccessible between the borders of France, Switzerland, Italy and Austria. It is therefore impossible for alpine hunters to keep an eye on them.

In the wake of this extreme adventurer, French alpine hunters popularize these strange skates attached to the foot.

It is in 1907 that the first ski competition is organized with a public and the press.

It was then that people who had never set foot in the mountains wanted to come and discover this sport and have fun. We then went from useful skiing to futile skiing. The intoxicating pleasure of sliding and speed became fashionable.

At the beginning of the 20th century, only a handful of vacationers started skiing. Switzerland was their first playground. In Davos, the famous author of Sherlock Holmes, Sir Arthur Conan Doyle, with his wife Louisa, hurtle down the slopes of the resort.

He shares with his readers the sensations that skiing gives him: the feeling of flying.

The women transform it into a vector of emancipation, in particular by wearing pants, more adapted to the practice. They seize the right to compete, from the very first competitions: an exceptional fact in the history of the sport.

Gradually, women began to ski and sometimes better than men.

It was in Davos that a Swiss engineer developed the first buttock lift in the 1930s.

Later, during the 1936 Olympics, the Nazis used the victories of their athletes as an instrument. Emile Allais became the great name of these competitions. The Frenchman from Megève will revolutionize alpine skiing by tinkering with skis and equipment to implement new methods of skiing, parallel skiing: the Allais method.

The skis are an essential equipment for the war.

It is then, in 1943, that the famous race the Patrouille des Glaciers is created, in order to remotivate the troops. A 53km high altitude course that developed values of solidarity and fraternity. The race takes place every 2 years and is open to all civilians.

During the “Trente Glorieuses”, snow vacations, which have become a mass leisure activity, change the face of the mountains and their inhabitants…

Mountain villages are modernizing and building to welcome tourists in the resort. This new development will create many jobs in the villages, for all generations.

To attract tourists, the ski resorts communicate joy, voluptuousness, snow. Happiness on skis is everywhere. In Switzerland, the resort of St. Moritz was the first to make skiing an attraction for tourists. A century later, St. Moritz is still a glamorous, cheerful and popular jet-set resort. It has become a must for social gatherings.

Ski camps appeared in French schools. For the first time, children leave their parents to spend some quality time with their classmates during a snow class stay. It is with these young skiers that we hope to conquer so that they become the adults of tomorrow who will consume the winter sports holidays.

In 1964, the French government set up the snow plan and allowed new villages to be built in the high mountains to accommodate the many tourists. This is how resorts such as Avoriaz and Tignes came into being.

For the first time in history, you can follow the Olympic Games’s on colour television at home. Jean-Claude Killy won the Olympics and became a sportsman who was very much appreciated by the general public. He will make millions of people want to ski. In the 1970s, Rossignol (founded by a carpenter) becomes the largest ski manufacturer. Farewell to wooden boards, now it’s time for modern materials. Skiers discover new sensations..

In the 80s, never so many people will ski, rich and less rich. It becomes a mass leisure activity.

It also develops the beginning of the “free” era where skiing will take a turn in the style. Mountaineers began to ski and descend the dizzying slopes of high mountains. It is the rise of off-piste and freerides with risk-taking that is part of the pleasure.

If you would like more information on the best ski destinations in Europe, please do not hesitate to contact us.